After completing the giraffe a week or so ago, I was left with a ball of brown yarn.  I wondered what I could do with it and thought I’d try my hand at crocheting a little robin redbreast.  I put my trust in Google to find me a simple pattern and it gave me an easy looking pattern from Sooz in the Shed.   The only difference being, I used toy stuffing as opposed to the polystyrene ball used in Sooz’s pattern.

I followed the crochet pattern as described working in rounds, can you guess what happened?  Yes, yet again, I kept gaining stitches with absolutely no idea how they were appearing.

When it came to joining the white yarn (I used a mushroom colour as it was the same weight as the brown and looked quite good) I found myself in trouble.  The joining stitches looked awful.  I think I’m yet to learn how to do these things neatly.  As I approached the top of the robin, I gave up on the pattern altogether and started doing my own thing.  This was my fault because I kept gaining stitches and losing count of where I was! 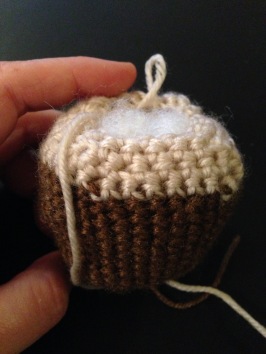 Once it was all joined together and I had a little ball of what looked more like a Christmas pudding than a robin, it was time to make the wings. Rather surprisingly, these were a lot easier than I expected and I was pleased with how they turned out!

Next piece was his cute little redbreast, this was easy peasy and was done in next to no time.  I sewed it to the body as I thought it appeared on the picture……..

I sewed the wings on next and had a go at making some eyes out of mushroom coloured yarn.  To say it looked awful would be a massive understatement: 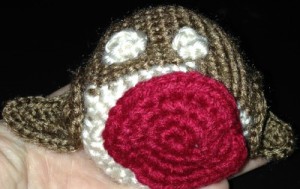 So, it looked rotten.  I ended up having to take his little redbreast off and his wings and re-position everything.  I ended up re-positioning the wings 4 times, which I found extremely annoying!  In the end I decided to give him a pair of googly eyes instead of crocheted eyes.

Now I will be the first to admit that he is a bit cross eyed and ever so slightly wonky, but don’t you think it just adds to his charm?